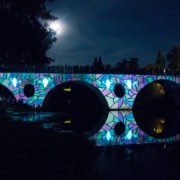 OMAi presented their first foray into the world of video mapping with their prized entry into this years edition of the Genius Loci Festival in Weimar, Germany.

The piece was presented for three nights on the Sternbrücke, a stone bridge located in a park at the center the historical city of Weimar. The ten minute animation ran four times each day with a twenty minute waiting interval that allowed time for audiences to gather.

OMAi artist Markus Dorninger aka Maki explains the thoughts behind the piece:

We aimed to take the bridge through a series of metaphorical “eras”. Our existence is shaped by natural and historic forces that ebb and flow, constructive and destructive, liberating and oppressing. We wanted to portrait the bridge as a playing field for these forces, and try to imagine how all these transformations appear to a distant, innocent observer.

The soundtrack is an important part of the experience. Cologne-based composer Philip Zoubek recorded the entire piece from analogue sounds created inside a grand piano. The animation was created by Maki, Matthias Fritz aka iink and Tom Stockinger by mixing Tagtool artwork with other animation techniques.

After the presentations two members of the Tagtool crew (OMAi co-founder Matthias Fritz and artist Ilan Katin) invited the public to paint on the bridge using their own Tagtool software for the iPad.

There was a special moment on Saturday night: a woman named Mireille asked us to write a marriage proposal upon the bridge for her partner René. While we did not actually meet either of them, we were told that René accepted. We wish them all the best!

Our mission fulfilled, we greeted local artists ‘illumat‘ and other fellow illustrators with a brief Tagtool crash course so that they could get some hands on time with the big projectors at our disposal.