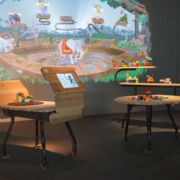 Animaker is an interactive art installation that breaks the border between the virtual and physical world. A large immersive projection shows an ancient jungle temple. In front of it, you are asked to build an animal out of colourful building blocks. Your creation is placed on a 3D scanning station, where a virtual, AI-powered robot identifies your animal and brings it to life in the projected environment. Animaker playfully introduces visitors of all ages to current technological developments such as artificial intelligence, 3D-scanning and XR (cross reality).

The motivation behind this project was to create an interactive museum experience which is accessible to visitors of all ages. Many common techniques that are currently popular are inherently exclusive or have significant technological barriers. AR experiences usually can only be enjoyed indirectly through a device screen, and VR headsets commonly have an age rating of 12 or even 13+. By focusing on the physical activity of working with building blocks, and using projection for the virtual environment, these limitations can be overcome.

Animaker is a unique international collaboration between artists, technologists and educators. The artificial intelligence engine responsible for identifying the animals is provided by Resonai, a startup based in Tel Aviv and Palo Alto. The animal designs were created by Mexican artist Rimiyoho using Tagtool. The original concept was developed in partnership with The Tech Interactive, a science and technology center in San Jose, in the heart of Silicon Valley. The first iteration of the installation opened there in May 2018, with three scan stations and a 12 meter (40 feet) wide interactive projection.

Animaker was also exhibited at AWE USA 2018 and Ars Electronica Festival 2018. A custom version with South-East Asian animals was shown at the Science Museum in Singapore in March 2019 as part of a collaboration with MeshMinds. Animaker was nominated as a finalist for the Interactive Innovation Award at SXSW 2019 in Austin.

In June 2019, a new version of the installation was presented at Ars Electronica Center in Linz, where it can be experienced in the Kids’ Research Laboratory during museum opening hours. For this new version, the furniture was redesigned by Walking Chair Design Studio.

Since opening the first Animaker installation two years ago, more than 80,000 animals have been scanned and identified (as of December 2019). Evaluation of visitor feedback at The Tech Interactive shows that we were able to achieve our goal of introducing people of all ages to advanced A.I. and computer vision concepts in a fun and approachable way. We’re especially happy about the relatively long average engagement time of around 15 minutes, and the fact that engagement of female visitors is clearly above average (just over 60% of users are female).

Animaker represents a new direction for OMAi. We incorporated experimental techniques and collaborated with international partners from different fields of expertise. At the same time we continue to follow the path of our core motive: spontaneous creativity.