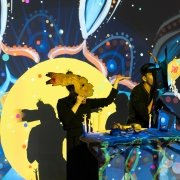 It was the kick-off to an exciting month! From September 6-10th, as part of Ars Electronica Festival, we lit up the industrial structures of PostCity hall in Linz. A multifunctional Tagtool community space hosted live performances and installations, as well as providing lots of opportunities for creative exchange. Tagtoolers got to know each other in person, jammed together and presented their personal projects surrounded by three unique installations by OMAi: the Tagtool Space, the Playground and Animaker.

A Tale of Three Installations

The Tagtool Space was developed especially for the Convention. It consists of a wall that curves smoothly at the bottom and extends over the floor. The space invited the audience to become part of the art. Of course the kids had great fun, and so did we. Especially during the times when we used the space as a stage for performances and jams!

The Playground is a spontaneous projection mapping on temporary structures, simulating an ever-changing urban landscape. The installation invites the audience to interfere creatively either by light-painting or building their own buildings or structures. The scenario was created using a combination of eco-friendly building blocks called Bioblo, and delicate paper-cut from artist Dieter Puntigam’s project Cell City.

Animaker is an interactive installation that breaks the border between the virtual and physical world. A large panoramic projection shows an ancient jungle temple. In front of it, visitors are asked to build animals out of Lego bricks. Their creations are placed on a 3D scanning station, where an AI-powered robot identifies them and brings them to life in the projected environment. This project was realised in partnership with The Tech Museum of Innovation from San Jose, and AI-startup Resonai. The animal designs were created by Mexican Tagtool artist Fernando Sica aka Rimiyoho. We’ll tell you more about this exciting project in a separate blog post!

Needless to say, we had some memorable Tagtool sessions during this intense and creative time together!

TAM (Theatre of Animation Art) came all the way from Ukraine to amaze the audience with their performance of “The Cat that Walked by Himself“. The show is based on the tale by Rudyard Kipling and combines puppeteering, shadow-play and digital projections. It also features beautiful masks inspired by Indonesian traditions. The live music was played in perfect interaction with the other elements, contributing to a totally unique and inspiring experience.

Dieter Puntigam – who also contributed the Cell City project as part of the Playground installation – performed with dancer Bea von Schrader. This Austrian duo has been working together since 2008, presenting performances with Tagtool and dance around Europe. This time they presented a delicate spectacle, a fluid and flowing non-verbal conversation between two artists who have found their voice and language.

Folkwires is Lora Shopova and Ivan Shopov from Bulgaria. The duo combines their passion for technology and Bulgarian folklore in a wild audiovisual exploration of their culture. Lora transformed live-paintings of sacred and mystical geometries with digital effects, accompanied by Ivan’s exquisite sound design.

Yaguar is a Colombian artist with a Street Art background, currently based in Zaragosa. Inspired by Land Art, he loves to work with the shamanic power of light in natural spaces, but this time he presented an energetic and colorful solo live-painting performance, surrounded by the industrial interior of Post City hall.

Tetete is an interdisciplinary artist group from Austria, creating off-mainstream entertainment for children aged 6-99. Improvisation is at the core of their work. Story, music and scenery are created live in front of the audience. At the Tagtool Convention they presented a peek into their magic universe, with Christian Reiner on microphone and the one-and-only Karl Ritter on guitar.

Last but not least, several Jam Sessions brought together all these exquisite artists in various combinations!

Back into the Deep Space!

The Tagtool Convention wasn’t confined to our community space! Like last year, we presented a collective animated painting at Ars Electronica Center’s Deep Space. Using this giant, high resolution canvas, the Tagtool crew created a stunning interactive scenery in which the audience could walk around in.