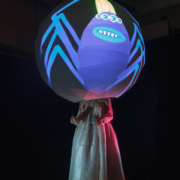 On August 19th, the day after the Tagtool Convention, eight artists and the OMAi crew traveled from Austria to the Czech Republic. We arrived at Studio Libušín, situated in the late summer countryside just outside Prague. We were welcomed, true to tradition, with shots of Calvados, made from the apples in the studio’s orchard. Frances Sander and Dima Berzon, long-time Tagtool supporters and true players in art and life, were the hosts of a week-long OMAi artist residency.

The residency had a concrete goal: to develop an interactive art installation for Electronica festival in Linz, which was having its 40th edition shortly after. Having exhibited there in the past years, we know there’d be a lot of visitors from all around the world, and no time for longer interactions. We wanted to showcase some beautiful collaborative Tagtool work in a fun, interactive way.

Making of a Head

Everyone’s creativity was still on overdrive coming from the Convention, so in no time we had a plan of action. We cut and glued carton until we had a big sphere with an opening at the bottom. We suspended it in the studio and pointed projectors at it, blending and mapping the image so it neatly wrapped halfway around the sphere. The prototype worked well, so we made a second, bigger sphere.

In the evenings, it was multiplayer time. What a joy it was to dive into the flow of these Tagtool and to watch these skilled and creative minds visually mix and merge on the surface of the large, glowing orb.

While the visualists knocked out one piece after the other, Sergij from TAM was producing the soundtrack on his brand new Octatrack sampler. Dima mounted a little device called an exciter on the sphere, which turned the entire thing into a loudspeaker – very exciting indeed. All that was missing now was interactivity.

to Linz,to the final result: Meet the Head Exchange Program, jokingly also known as the OMAi Brain Scanner. Put your head inside, and get a personal audiovisual art experience. LEDs flashing to the music turn the inside of the sphere into a one-man disco. In the meantime, to the it seems they can look inside your mind.

Technically it’s all pretty straightforward. If the sphere is empty, people can use Tagtool to paint and animate on its surface. As soon as somebody puts their head inside, a sensor triggers playback of a random prerecorded session created during our residency.

But is there really coincidence in this universe? Doesn’t everyone get the head they deserve?

PS: We are looking to take the Head Exchange Program to the next level. If you know about an opportunity to develop it further and exhibit it in a suitable setting, please get in touch!

Participants of the Residency

TAM’s participation was made possible by iPortunus