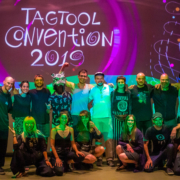 OMAi was delighted to host the Tagtool Convention 2019. This informal gathering of artists and musicians took place on August 16-18th in Tulln, Austria. The theme of the event was an exploration of alternative visions of audiovisual live performance using Tagtool.

Twenty artists from ten countries joined the gathering at Kunstwerkstatt Tulln. During the days, there were workshops and discussions. In the evenings, the artists presented their performances. Three intense and inspiring days came to a fitting end with a collective Tagtool session on the walls of an ancient Roman tower.

It all kicked off on Friday with a workshop for the next generation of creatives. It was a riot, and the kids rocked the 40 meter wide immersive projection at the venue!

In the evening, OMAi’s founders, brothers Markus and Josef Dorninger and Matthias Fritz, welcomed the audience with a short introductory talk. This was followed by a surreal fairy-tale presented by Tetete, featuring improvised narration by Christian Reiner and electronic sounds by Philip Leitner.

The second act was expertly delivered by Dieter Puntigam, Bea von Schrader and Marcus Saravia, all from Austria. Their performance was inspired by the Fridays for Future and featured Dieter’s incredibly fluid projection painting using an old-school DIY Tagtool console, and Bea’s urgent and sublime dancing. Marcus added an additional layer to the performance by incorporating long-exposure light graffiti techniques.

Next up was US-born Berlin resident Ilan Katin, who took things onto the meta plane with a witty visual monologue. The audience clearly appreciated his stories that meandered from the quirks of inter-personal communication all the way to a spoof of famous works of art history.

The following performer, Sol Carta, came all the way from Buenos Aires. While she usually works together with live musicians in an ensemble called Lila, she performed solo this time around, with the music prerecorded. Even so, her performance was a skillful improvised visual narration full of magic moments!

Friday’s sessions were concluded by , who has become a regular at Tagtool conventions with his trademark digital shaman style. The audience witnessed him populate the space with weird and wonderful creatures inspired by art of his home country Colombia.

Saturday afternoon there was ample time for the participating artists to introduce their practice to the group, and to discuss the future direction of the Tagtool project.

The evening sessions were initiated by TAM aka Theatre of Animation Art from Kyiv, Ukraine. Their piece clearly showed the group’s collective experience as interdisciplinary performers. The theme was human self-depiction throughout the ages, from cave paintings, over classical self-portraits, to today’s selfies.

The second act of the evening was a duo consisting of Sofia Cordoba from Uruguay and Lorenzo Tabacchi from Italy. Sofia conjured up poetic visions of microscopic worlds, outer space, and nature under threat by human exploitation, while Lorenzo provided the soundtrack.

Next up was Beijing based art-rock duo Guiguisuisui (鬼鬼祟祟). This atmospheric, interactive theatre performance features a cast of characters from an imagined future and past. They really took the audience on a memorable journey!

On Sunday, it was time to take the art out onto the street. We set up the projectors in front of an ancient Roman tower. The audience lounged on the grass, enjoying the warm summer night, while the artists joined forces on the walls of the tower in a sprawling multiplayer jam session.

For us at OMAi, it was an absolute joy and privilege to welcome this amazing group of artists. We shared beautiful moments, expanded each other’s horizons, and became friends. These were three days to remember. Thank you to all who made it possible!