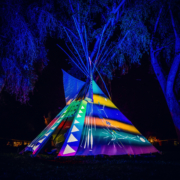 For those who follow OMAi’s projects, the combination of Particle Physics and projection art isn’t new. At Paseo festival 2018, we added indigenous cosmology into the mix!

Everything started in 2014 when artist and educator Agnes Chavez invited OMAi’s Markus Dorninger to work together. They developed a workshop format for young people, in partnership with the Atlas Experiment at CERN. The idea was to use Tagtool to understand and communicate concepts from quantum physics. The result was a success, so Agnes invited Markus to repeat their collaboration at the 12th Havana Biennial (as can be seen in this video).

In September this year, they met again at Paseo Festival. There they joined forces with Steve Tamayo, a Cultural Specialist from the Lakota tribe. This time around, they playfully combined concepts from quantum physics with native American cosmology.

Steve built a teepee at Kit Carson Park in the center of Taos. It was the perfect 360-degree canvas to bring his stories to life using Tagtool. During the two festival days, the audience witnessed captivating narratives, visualized live as stunning projections.

For five hours each night, every fifteen minutes, twenty spectators came into the teepee. They got a taste of Steve’s and Markus’ storytelling. Good Medicine!

Students of Taos Day School, Taos Integrated School of the Arts, Santa Fe Indian School, and the Native American Community Academy contributed additional Tagtool drawings. They created them in workshops before the festival.

We are looking forward to the next collaboration as part of the Projecting Particles Collective!

Photos by Lance Garber and Glenneroo